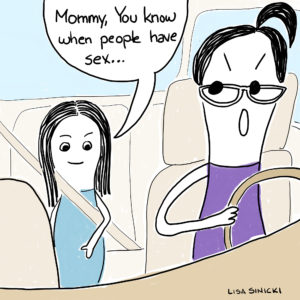 “You know when people have sex?” asks Lindsey. She is in the third grade at Peaks Island School. This afternoon, we went into Portland for ballet class and are now on our way to catch the ferry home. Lindsey sits behind me on her grey plastic booster seat as our battered Ford Windstar minivan slows for a red light. Our Best of Disney IV cassette tape, wound a little too tight, auto-reverses, filling the van with perky Hailey Mills singing “Let’s get together, yah, yah yah!”

I glance into the rearview mirror. Lindsey pulls at what is left of her bun, which was messy to start with and has deteriorated into something similar in texture to a brick of shredded wheat. She sits up straight in her ripped tights and pink tank top leotard as she waits for my response.

“Yes?” I say. I have no idea where this is coming from — or where it is going.

“How does it work?” asks Lindsey.

I have no idea what Lindsey is really asking. I’ve already gone over the basics of sex, which, from what I can tell, is more than what most of her friends know. I have explained in real and honest terms exactly where babies come from. I identified body parts by their proper names and described their roles. Lindsey sucked up the information like a vacuum cleaner.

I tread lightly. “How does what work?”

“How does the penis get into the vagina?” Lindsey wrinkles her tiny nose. Then she gets right to the point: “Does it just slide in, or does the man have to shove it?”

Every muscle in my body tenses. My scalp tightens and I can feel my hair. I tap the brake a little harder than I mean to. The car jolts to a stop, launching a forgotten toy into the air — some sort of plastic moose that has been hibernating in the graveyard for Happy Meal novelties under my seat.

I feel my cheeks grow warm. Thoughts zoom through my head like a herd of preschoolers racing Big Wheels. What is the appropriate answer to a question like this? What should a mother say? I am sure that if there were a Master Manual of Good Parenting, there would be a whole section on why it is inappropriate to talk about sex from this perspective — on a mechanical level — with your child. Especially a child of 8. I’ve never heard of an 8-year-old whose curiosity extended beyond knowing where babies really come from. Yet my child has asked a question that makes me blush.

At the same time, I don’t want to lie to Lindsey or put her off. A child brave enough to ask this sort of question isn’t going to accept, “Never you mind,” or “I’ll tell you when you’re older,” as a response. Telling her that I’ll discuss it with her later at home would give me more time to think, but it would also elevate her question into too big a deal. Plus, I don’t want to create any sort of an expectation — good or bad — of what sex will be like. Someday, eventually.

I rack my memory for something — anything — that I can base my response on. I need an answer that is age- and maturity-appropriate — that contains neither too little nor too much information. Time decelerates to super slow-motion as I realize for the first time how much parenting has in common with reality game shows.

Who Wants to Raise a Successful and Well-Adjusted Child?

I imagine Survivor‘s Jeff Probst in cargo pants and a tee shirt sitting on the hood of my van. He issues a polite but firm warning: “You have five more seconds to complete the challenge.”

As Lindsey’s mother I live in the metaphorical hot seat, which, at this moment, is the driver’s seat of my car. Every challenge I face — from how to punish Lindsey for painting the family room carpet with pink nail polish to whether or not she is allowed to entertain boys in her room — is increasingly difficult. Based on my responses, Lindsey moves either one step closer to becoming an independent and healthy adult — or one step sideways toward lifelong neurosis, co-dependence, and chronic drug abuse.

Like the contestants on Survivor, Lindsey, her father and I belong to a tribe — our Peaks Island, Maine community. By definition and intention, the tribe works together for the welfare of the group and is a source of support. The reality is a lot more complicated. Every tribe member — from Constance Howard who wants to revamp the school curriculum, to Paul Marco who wrote the grant that funded the new solar-powered trash compactor — has his or her own agenda and belief system. Half of the island wants to remain part of the City of Portland and the other half wants to secede. Passion runs hot on these issues, even the small ones. As stated by my neighbor Bob: “I respect your right to your opinion, but if you don’t agree with me, you’re an idiot.”

I turn my head and face Lindsey in the backseat behind me. She smiles and resumes stretching the small holes in her pink tights to make larger holes.

What should I tell her? I want to reach out to another parent who has been through this for advice — a “lifeline” so to speak. But counsel can be costly. After last month’s PTO meeting, I heard my neighbor, Maureen, ask a friend for a suggestion on how to stop her 2-year old, Terry, from throwing tantrums. Constance, one of our tribal elders waved her coffee cup. “Just walk away, even in public,” she said. Constance shoved a third brownie into her mouth, then comforted Maureen with anecdotes about what her own children had put her through. “Everything will be fine,” she promised.

But as soon as Maureen went into the kitchen to refill the coffee pot, Constance turned to her close friend Trudy. “It’s hopeless. How could any kid not be a whack job with Maureen as their mother?” she said. Based on this experience and others, I know that sharing family business — such as Lindsey’s sex question — would expose us to public analysis and ridicule. I certainly refuse to go there on purpose.

What happened to Betty Silva demonstrates what happens when your private life becomes too public. Betty dated a guy 10 years younger who had money but no discernable source of income. And she allowed her 8-year-old daughter, Gretchen, to have friends over (and jump on the trampoline in their yard) while she and her boyfriend had dinner at the Cockeyed Gull, half a block away from her house.

Betty was branded a Bad Parent. There was no physical mark that identified her, but somehow every adult in the tribe knew — via some sort of an internal radar-like sixth sense. Parents, especially mothers, can see and sense things other people cannot, the same way dogs hear sounds that people don’t. (It’s the same witch-like ability that enables some parents to stand in the kitchen and know that their children are misbehaving in the backyard.)

As a Bad Parent, Betty was victimized with backstabbing and gossip. “I think she’s a prostitute,” said one neighbor. “White trash,” said another. “Lonely victim of child abuse with father issues,” diagnosed a third. Eventually, the tribe banished her from the ArtFest planning team and the Sailing Club scholarship board. At first, Betty felt relief. No more selling raffle tickets to benefit the Health Center and no more lengthy debates on key issues such as whether the PTO should sell baked goods before its meetings, after its meetings — or both. But then she experienced the larger consequences. The children of the Bad Parents are punished, too.

No Good Parent’s child plays at a Bad Parent’s house. I once witnessed Constance anticipate the presence of Betty’s daughter Gretchen — from three blocks away.

“We have to go in, kids. We don’t want her to see that we’re home,” she said. Evidentially, Bad is contagious and can be spread airborne, like the flu, even hours after the carrier has left the room. Eventually, Betty and Gretchen had enough of being shunned. They moved away.

Lindsey waits for my answer. She looks at me from the backseat of the car. Her innocent eyes reveal that she has no idea how many nerves her question has touched. The other mothers will be horrified if they realize the wealth of information I’ve already shared with her. And while I’d be relieved to never receive another invitation to a Tupperware party, I know that to jeopardize Lindsey’s inclusion in Laura Bowman’s upcoming Cinderella birthday party would be unforgivable.

It is time to answer Lindsey’s question.

I blurt out the most brief, honest, non-graphic explanation I can think of.

“It’s a matter of personal style,” I say.

The moment I say it, I know I’ve probably said something inappropriate. In the eyes of the tribe, my answer is definitely a walk on the Bad Side.

I watch Lindsey in the rearview mirror. The look in her eye reminds me of when the cursor on my computer turns to an hourglass. I can see her process the information. Then she smiles and nods. She is satisfied with my explanation.

I exhale. In this moment, it doesn’t matter what the rest of the tribe thinks. I gave Lindsey the best answer I could. It might turn out to be the wrong answer, but that discovery is (hopefully) years away. I’ll take my chances. As I turn my attention back to the windshield, I notice that the light has turned green.