Date night at the dump (essay) 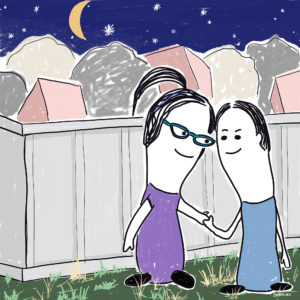 Published in the Island Times July, 2011.

I return home to Peaks Island on the 7:15 p.m. ferry. How will I spend this clear summer Saturday night? I wonder.

As I disembark, I spot my husband, Ron. Ron leans against the stone wall at Jones Landing, near a palette of beer earmarked for Reggae Sunday. He smiles at me and I blush, flattered that he has walked down from his ice cream and t-shirt store to meet me. I wrap my arms around his middle and receive a soft kiss.

Awww. He missed me.

Ron leans over and whispers an invitation for a date. On perfect summer nights like this, middle aged couples like us walk around the island to admire the view of the Portland skyline, eat barbecue at friends’ cottages, and attend concerts at the Fifth Maine Regiment House. What will will my Saturday night be?

“Wanna go to the dump?” Ron says as we walk up the Welch Street hill.

Ron’s ice cream and t-shirt store generates tons of garbage–too much to let pile up for Monday trash pick-up–so he hauls it to the dump himself. He has already crammed the Ice Cream Mobile, his ’72 turquoise Suburban, with trash in preparation. The Suburban is huge and wide with bench seats that accommodate four across–plus a rear-facing “back-back” seat. Fully loaded, it resembles Santa’s sleigh. Except that the heaping sacks contain empty candy cartons and sticky used ice cream dishes–not toys and candy.

I slide in through the driver’s side; the passenger-side door, which won’t open from the outside, is held shut from the inside by a bungee cord. The window next to me is rolled down, as usual, because rolling it up requires a wrestling match.

Ron drives, which is a good thing. When I drive, the Suburban floats around the road entirely on its own volition, illustrating where the saying, “handles like a boat” comes from. I am really glad it’s an Island only car. The thought of driving that monster someplace with highways, traffic lights, or speed limits over twenty miles per hour makes me shutter. Nonetheless, it is a piece of Americana. I hear it channel the voices of the ‘70s Detroit automakers who created it. “Damn it, if we have a whole lane, we’re going to fill a whole lane,” they say.

As we near the dump, I take a deep breath. Clean sea air mingles with wafts of sour milk, as remnants of melted ice cream in the trash bags curdle into cottage cheese.

At the dump, Ron lowers the back door of the car into a horizontal position, then swings the rear window up and locks it into place. He hoists a full bag of trash out of the back, then launches it into the air. The bag spins twice, then lands square in the middle of the dumpster. I am married not only to The Ice Cream Man, but to the Michael Jordan of the Dump.

As Ron grabs a second bag and then a third, I slowly drag my first.

“You really aren’t much help,” he teases.

“Would you prefer I stay home next time?”

“Absolutely not,” he says.

Ron knows why I lollygag: I am afraid of the car’s rear hatch. “Call Paul” our island jack-of-all trades, has replaced the hinges and lock, but I’m not convinced. To me, the rear window is a guillotine in standby mode. If the car ever goes nuts like Steven King’s Christine—or if gravity prevails—I want my neck as far away as possible.

Meanwhile, Ron hauls his sixth bag. He really amazes me. At sixty-one, he has a job that requires mopping floors, scrubbing counters and touching other people’s trash. And he does it willingly, “for the benefits.” Not health insurance, retirement savings or paid vacation which, being self-employed, he doesn’t get. The benefit Ron receives is time with his family–me and our daughter, Lindsey.

Ron tosses the last bag of trash into the dumpster and we climb back into the car.

“Would you like to take the long way home?” he asks.

I nod yes. We hold hands as he turns right down Brackett Street toward the rocky back shore of the island. We are off to admire the view.

Not a bad date, I think. Not bad at all.