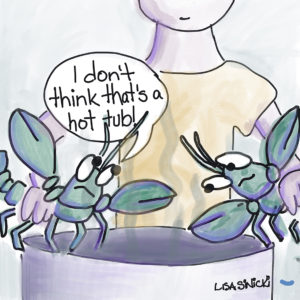 This essay was originally published in the Island Times in 2011.

I live on a small Maine island, so earwig bugs aren’t the only things that crawl out of the woodwork in summer. Everyone I’ve ever known comes to visit—from Great Aunt Edna’s cousin Alan, to the guy who called me “Lisa Pizza” in kindergarten. People I love. People I like. People I never really liked. People who never really liked me. Eventually, they all make their way to Maine and show up at my house hoping for the same thing: a traditional Maine lobster dinner.

I want to be a good hostess, so I take the ferry (no, we don’t have a bridge) to Harbor Fish Market in Portland to purchase the appropriate number of pound-and-a-quarter lobsters. I pretend I’m happy to do this. No one suspects that I’m torn between pleasing my guests and an issue of conscience: As much as I enjoy eating lobster, I despise killing them. And not just the physical act of lobster slaughter. I have an emotional attachment to lobster. I adore them in that, “Gee Mom, he’s cute, can I keep him?” sort of way. You see, I loved a lobster once and that experience, though it ended in terrible agony, set the stage for all of my subsequent crustacean relationships.

My lobster love started in elementary school, when my family lived near the Jersey shore (No, not that part of the Jersey Shore). One warm night every August, we headed off to The Clam Hut in Highlands to celebrate Mom’s birthday. It was right on the water, and we would wait for what seemed like hours for a table on the dock. I ordered the kids’ Fisherman’s Platter, a small assortment of fried scallops, shrimp and clams. But the highlight was the bits of lobster my parents would pass over from their plates. Even at age six, I couldn’t get enough. I devoured claws, savored tails, and sucked every last briny bit from the scrawny legs.

We moved to Roanoke, Virginia, when I was in fifth grade. After that, we didn’t see—or eat—lobster for several years. Then one day, Mom returned home from Kroger, our neighborhood grocery store, with three stunned, but still moving crustaceans. “There was a big sale,” she said.

This was our first attempt to cook lobster at home, so Mom took a few minutes to figure out a plan. She leaned against the yellow Formica peninsula for a bit mumbling to herself–then she disappeared head-first into the cabinet below, re-emerging with the Farberware stockpot that had been included in the cookware set she’d received as a wedding gift to Dad.

Mom eyed the the pot and shook her head. “It’s too small to cook all three at once,” she said.

Mom boiled water in the pot, dropped two of the lobsters in, put the brown paper bag with the odd-man-out into the sink, and set the timer for twenty minutes.

“I need to run to the bank,” she said, grabbing her purse. “When the timer goes off, take these two lobsters out of the pot, and put the third in.”  I nodded in agreement.

I returned to the kitchen when lobsters number one and two still had five minutes to go. That was my mistake, returning too early. To kill time, I freed Lobster Number Three from his brown paper bag purgatory. I slid Three out of the bag, onto the counter. He ambled, a drunk sailor navigating his way across the sunshine yellow Formica. I attributed his lethargy to the long trip from Maine to Virginia. Plus, he’d spent a day or two at Kroger in a tank the size of a picnic cooler—certainly enough to put anyone or anything into a stupor.

I petted Three’s back. He seemed, if not to enjoy it, at least not to mind. He was everything a crustacean should be: tough shelled, segmented, and the color of pond scum. I named him Carl. I think he winked at me, though it was hard to tell for sure since lobsters don’t have eyelids.

When Carl headed toward the stove, I scooped him up and deposited him in the sink. “You don’t want to know what’s happening in that pot,” I said.

As Carl roamed the sink, I poked at his feelers and stroked his tail. Using a steak knife, I cut off the oppressive rubber bands from his claws freeing him to enjoy a few final unencumbered pinches.

Carl gazed at me lovingly from the bottom of the sink. “There’s this really cute boy at school, David, and he doesn’t even know who I am,” I said. As I rambled, Carl looked me square in the eyes and didn’t interrupt. He was a great listener.

I shivered. Time to add Carl into the pot. As I removed his now rosy red and lifeless brothers from the boiling water, I wracked my brain for an alternative. We didn’t have a salt water aquarium. I’d never heard of anyone keeping a pet lobster. My school already had a mascot. And there was no way Mom would let me set Carl free. Not after paying $3.99 a pound for him. Carl’s destiny was our dinner table.

Holding my breath, I held Carl over the pot. I closed my eyes and performed my duty. The moment Carl hit the water, I heard a scream—really more of a high-pitched hiss—ascend from the boiling water. I burst into tears.

When Mom returned five minutes later, I could only get out four words between sobs: “I—killed—my—friend.”

Now, I steam or boil lobster a few times every summer to satisfy guests. In Carl’s memory, I continue to seek a more humane method of preparation: lobster euthanasia. I’ve been assured by numerous people that a lobster’s nervous system is barely developed. However, I’m convinced that Carl and his brethren aren’t completely oblivious. I’ve heard the thrashing, the clang of shell against pot when a lobster is submerged in boiling water. It’s definitely not the sound of a celebration.

I’ve made it a point to explore alternatives. Occasionally, I have the fish market do the steaming for me, but I know that doesn’t alleviate my responsibility for the heinous act of lobstercide. As ace district attorney Jack McCoy of Law and Order makes clear: having someone else pull the trigger for you does not diminish your guilt. You’ve still perpetrated a crime.

Many chefs claim the fastest and least cruel way to kill a lobster is by thrusting a knife into the back of the lobster’s head. Personally, I reject stabbing. It’s entirely too violent. Besides, I’m not confident in my skills. If I put the knife into the wrong part of the head, I might cause some sort of lobster seizure, stroke, or cerebral hemorrhage. Not on my watch.

Several years ago, my friend, Lucy, a New York chef, offered her help. During a visit to Maine, she demonstrated what she considers Lobster Execution 101. Lucy picked up a live lobster, tail in one hand, body in the other, then twisted her hands in opposite directions as though wringing out a dishrag. I screamed as she threw the tail portion into a pot of boiling water and proceeded to separate the claws from the body in the same manner. “They don’t feel a thing,” Lucy said. I nodded but couldn’t speak as the tailless, clawless, lobster body continued to walk across my kitchen counter—apparently unaware that it had been dismembered.

I re-live this drama in my head every time a guest comes. Please, don’t make me cook lobster, I think as I prepare Aunt Willa’s bed. But then, I glance out at the water and notice the rainbow of lobster buoys bobbing in Casco Bay. We have a great lifestyle here and we need to preserve it. Our Maine lobstermen need me, need all of us, to earn their living.

I think about Maine, my adopted state and glow. It’s all true. Mittens and sweaters made in Maine are warmer, our blueberries sweeter, and our lobster is the most succulent in the world.

That’s when I shrug and plan a lobster dinner. It’s one of those things you do for the welfare of the community—like paying taxes, cleaning up after your dog, and staying on your meds. I choose to be a hostess first and a Crustacean Crusader second. It is what I believe serves the greater good.

At the same time, I hold those lobsters who give their lives for the cause in the highest esteem. I honor every lobster before I slide it into the pot by looking him in the eye and saluting. Then I whisper, “This will only hurt for a second.”